An open letter from Dylan Hargreaves, President of Kinesis, to the ZMK community…

As I sit here and write this today, I realize that I should have done this a month ago. And maybe even 2-3 months ago. So please accept my apologies. We’ve never done anything like “this” before, and we’re still learning as we go.

Before I dive in, I wanted to give you some background on Kinesis. Kinesis was founded in 1991 just outside of Seattle, Washington with the goal of designing and building the world’s most advanced ergonomic keyboard. After more than a year of intensive research, development, and testing, we released the Kinesis Model 100 in 1992, our very first “contoured” keyboard. I think it cost something like $750 MSRP which is like $1,500 in today’s dollars! 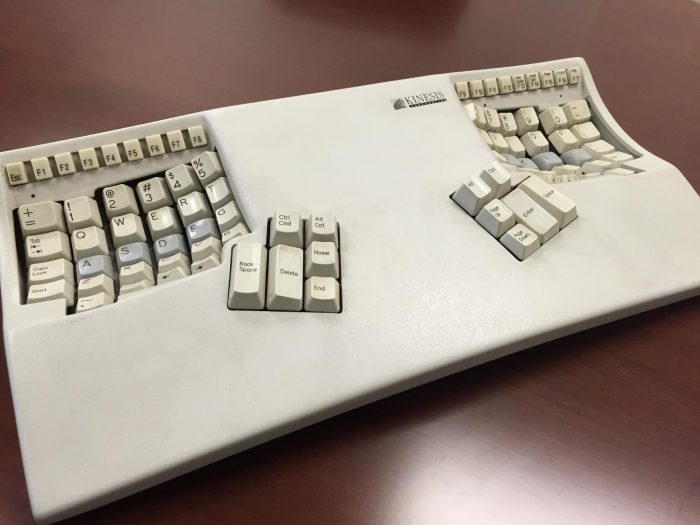 Since the release of the Model 100 we have introduced variety of other keyboards and accessories geared towards boosting “office” productivity and comfort, evolved the contoured line (although perhaps not as much as you would think…) and even introduced some ergonomic “gaming” keyboards (think RGB lighting). Our focus has always been on serving the very shallow end of the market, the people who want (and in some cases need) very powerful and specialized tools. And our product design efforts always start with the form factor first and foremost, and are guided by these ergonomic design principles that inform how humans can best interact with their devices.

We’ve always built our flagship contoured keyboards here at our facility in Washington, which partly explains why they’ve always cost so much. We’ve been able to off-shore production of our Freestyle line of split-adjustable (and flat) keyboards to keep costs down and make them more affordable as a more main stream alternative to the contour. Despite celebrating 30 years of business, we’ve remained a very small company. Kinesis has 14 employees, many who’ve been here for decades. We’re a family owned business that believes in treating our employees, our vendors and our customers right. Our specialities are ergonomics and manufacturing, and even though we make “tech devices”, we’ve never seen ourselves as a “technology” company. Bootstrapping is in our DNA and in many ways we still operate more like a startup than a mature corporation. 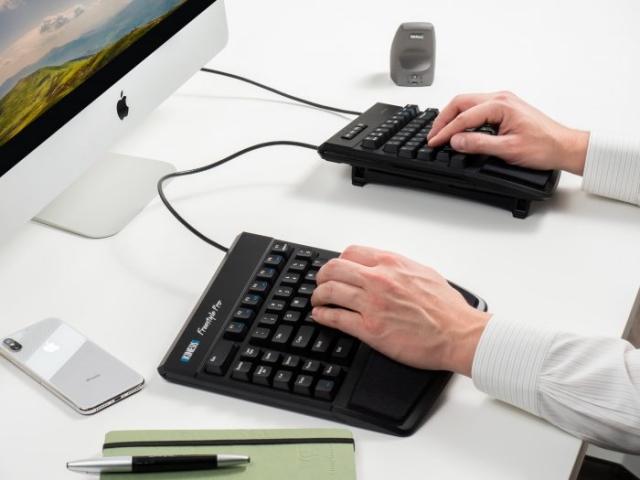 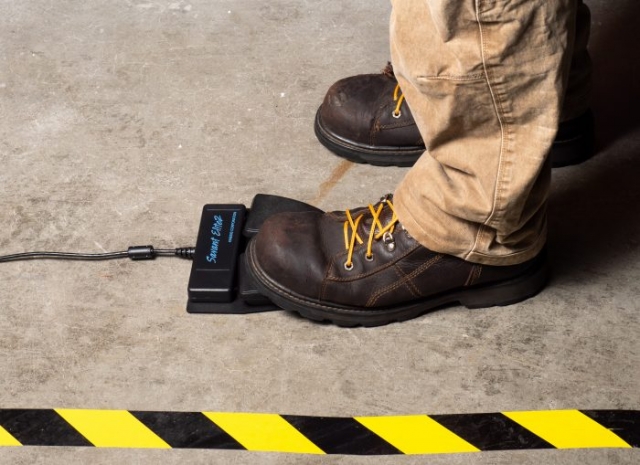 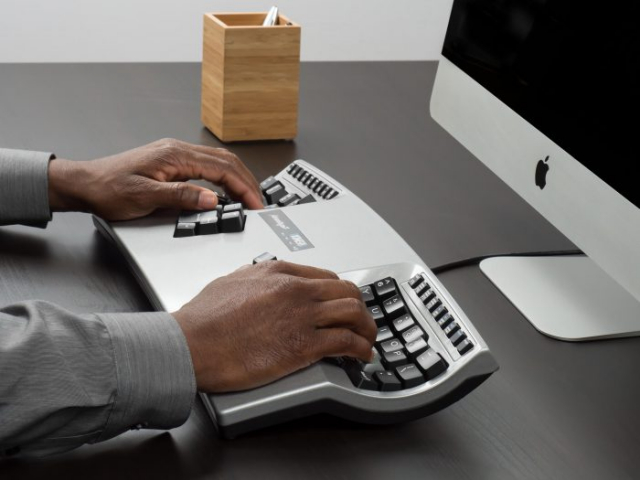 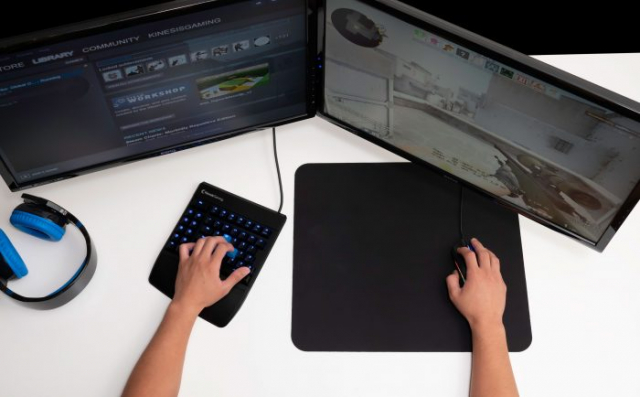 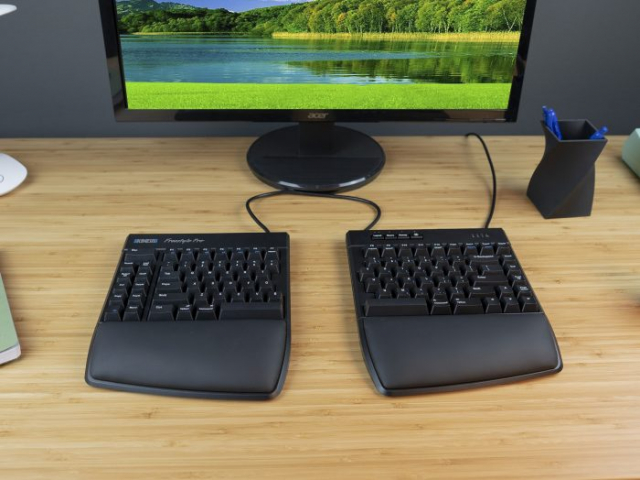 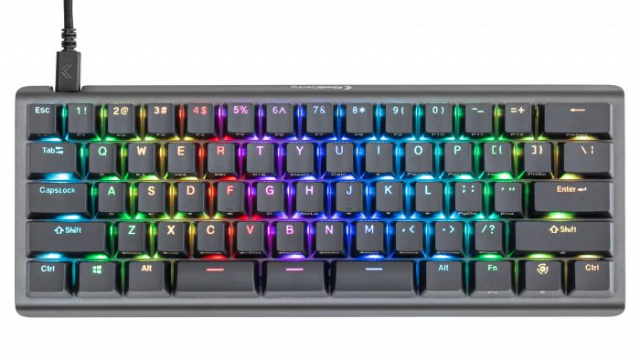 The Advantage360 project was kicked off way back in June of 2019 (with no dedicated product development team at Kinesis, these things don’t move quickly). The goal was “simple”, take our time-tested contoured design and adapt it for a fully-split typing experience to take the ergonomics to the next level. We’ve spent most of that time prototyping and testing to get the mechanical elements just right, but we also committed to building an all-new version of our proprietary USB firmware (which we call SmartSet) to make the keyboard more versatile and powerful than its predecessor the Advantage2. Our contoured keyboards have always been driverless and optimized for what we call “onboard programming” which allows users to re-configure their layout and record macros on the fly (no special drivers, plug-ins, software, or flashing required). As we learned early on, when you build a keyboard this different, making it really easy to reprogram is a critical piece of the puzzle. 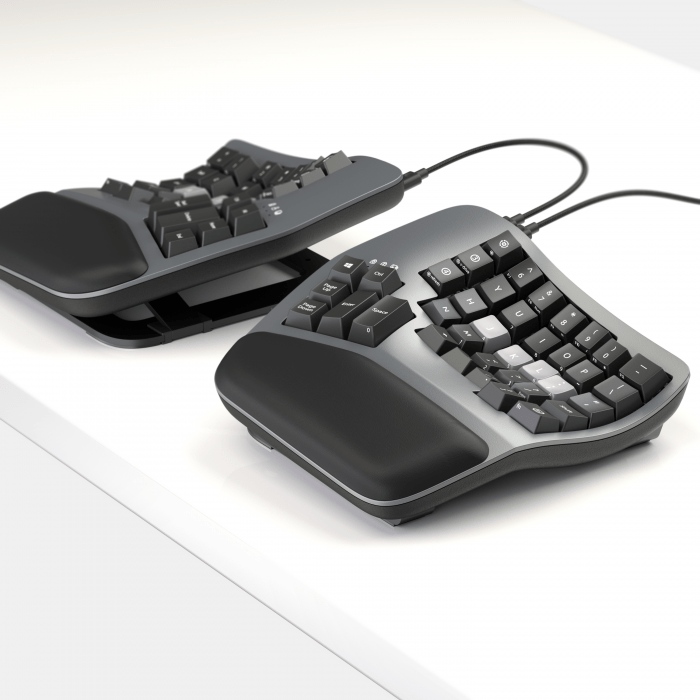 Users of the Advantage keyboards tend to fall into two rough buckets: 1) people who suffer from pain when typing on a conventional keyboard, and 2) software developers. The original contoured keyboard was created in the 90’s primarily for lawyers, secretaries, transcriptionists, novelists etc (software development wasn’t really on our radar). We’ve known for years that places like Google, Facebook, Amazon etc were buying our contoured keyboards, but we were surprised to learn via a 2019 survey that more than 75% of Advantage users identify as a software engineer of some kind.

For as long as I’ve been with the company, we’ve been hearing from those software developers that we need to make a QMK version of the Advantage, but we’d always politely ignored those requests. Our firmware was designed to be easy to program for the less-tech savy users I mentioned above, but in the process we had alienated some of our most sophisticated users and forced them to switch to alternate keyboards, or search for DIY solutions (like the custom controller developed by @zekjur). When we kicked off the 360 project our small team debated the merits of doing “something” with QMK, but we had neither the expertise to implement it, nor the context to understand what it meant to produce a keyboard with open-source firmware. So we proceeded with developing a new version of our SmartSet Engine using USB-C and dual processors.

Yea please. I would buy the new Kinesis if it would come with QMK support. I can’t go back to the archaic Kinesis firmware anymore.

About 6 months ago I connected with Jeff Parker over at Upgrade Keyboards and we exchanged some fascinating emails about the enthusiast community,  mechanical switches, and keyboard firmware. I started picking Jeff’s brain about QMK and he introduced me to Kacper and Harry at Polarity Works and their ZMK “BT60” project.

Shortly thereafter we hired Kacper and Harry to develop a small Bluetooth daughterboard that would connect to our SmartSet Electronics and allow customers to upgrade their 360 from USB to Bluetooth via an accessory module. We got about 75% of the way through that design when we collectively realized that building stand-alone Bluetooth electronics would be vastly superior to the piggy-back design.

It was at that point that Polarity Works pitched us on the possibility of building a fully-wireless, Bluetooth-optimized, backlit version of the 360 on an open source platform. Naturally we assumed they were talking about QMK and we got excited because this looked like a great way check a number of boxes for our long-time customers who’d been asking for all of the above. I won’t lie, it took a couple Teams meetings with Polarity for us to fully understand the difference between QMK and ZMK, and why ZMK was the better choice for the 360 (the clincher was learning that wireless linking had already been implemented). I want to pause here and say that what you folks have built is truly special and you should be very proud!

Note: It’s been a crazy couple of months here at Kinesis and we are supremely grateful to Harry and Kacper for being our guides on all things ZMK.

After we announced the ZMK version of the Advantage on December 15 on Twitter, we got a DM from the BDFL himself (I just learned that term…). And at that point I thought, “Shoot! I didn’t even know there was a ZMK guy. I hope we didn’t screw this up.”. Pete and I have since chatted and he’s brought me up to speed on open source, the ZMK community, and what it means to be a good citizen. I’m incredibly thankful for his both his time and patience, and I look forward to working with him more.

Open-source has come to the Advantage at last.

Choose the base USB model for our SmartSet Engine which has convenient onboard programming, or choose the Bluetooth Professional model for the ZMK engine.https://t.co/4l7NfPk3x3#Advantage360#Advantage360Pro#Ergonomics pic.twitter.com/wY6xr9zny7

Our Goals for the 360 ZMK Project

I won’t claim to fully understand all the dynamics at play in an open source ecosystem such as the ZMK community. And I’m sure that our entrance as a “brand/manufacturer/competitor” etc into this space has caused some ripples. Had I known then what I know now, we would have proceeded much differently to try to minimize those ripples. So please accept my sincere apologies for “ambushing” folks.

All I can say is that our intent was (and still is) to build this keyboard in service to our customers, and we will strive to do that in a way that hopefully will also improve the ZMK experience for everyone. Kinesis is not Microsoft, Razer, or Logitech, but we are a for-profit company: we want to make  the 360 a keyboard that combines  a great form factor WITH great electronics (your ZMK and our SmartSet), and we hope to sell lots of them. 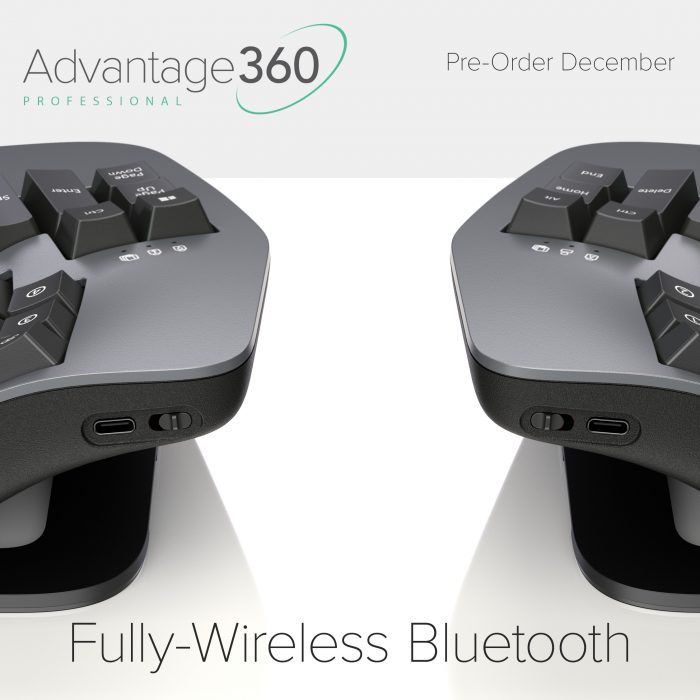 Any new features we create we absolutely want to give back to the project. We had initially asked Polarity to keep everything about their efforts as private as possible because 1) we didn’t know if it was viable and 2) we wanted “surprise” our customers. Now that that’s out of the way I expect we’ll be as transparent as we can be with the community. Polarity are currently working on individually addressable RGB indicator LEDs for us and we’re excited to that work soon. And I am interested in exploring wired USB-C linking and disabling the Bluetooth radio with our off/on switch. And we’d like to make it easier to add macros via the GUI. I also happen to know that we have a decent sized (and enthusiastic) user base who is very familiar with QMK, so I hope that those folks will take advantage of the chance to explore the ZMK platform and contribute in ways that will take it in new and exciting directions.

First and foremost, we’ve got to build the ~500 keyboards we took pre-orders for on Drop. But beyond that I hope that this is just the beginning of our relationship with the ZMK community. We’re a small company so we don’t have the resources to create “community manager” type role and have someone liaising on a full-time basis, so unfortunately we’ll tend to be more reactive than proactive. I know we won’t get everything right going forward and there is still a lot we don’t even know we don’t know. We’ll be relying on Polarity Works, Pete and the rest of the community to help keep us on the right track.

If you have a moment, please send your thoughts to media@kinesis.com. I would sincerely love to hear from you. And if you want to check out a pre-release version of the 360 and you are in the US, feel free to reach out and I’ll see what I can do. And if you’d like to collaborate with us on new features drop me a line too.