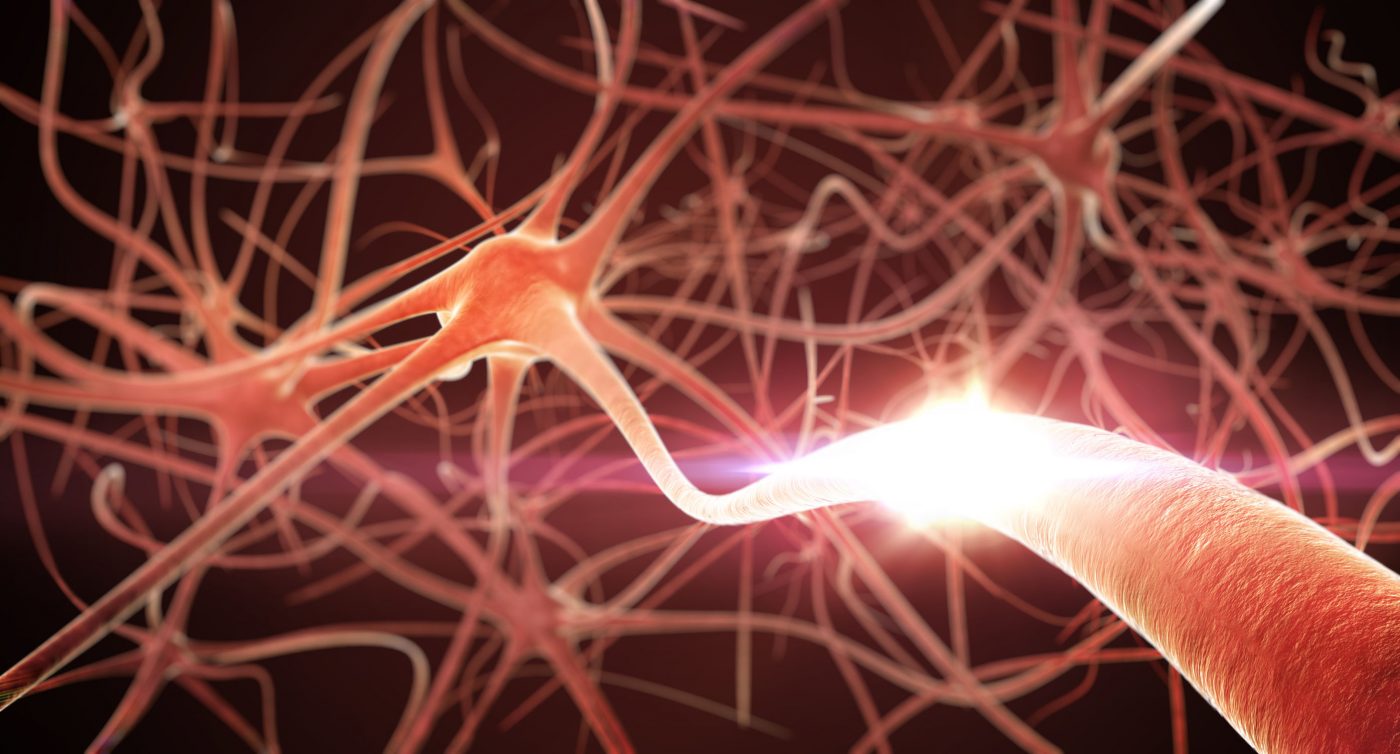 This article highlights the role of the Neural System and neurogenic inflammation as an overlooked cause of pain related to chronic repetitive strain injuries, also known as RSI.

Repetitive Strain Injury (also known as “RSI”) is the common term that describes the symptoms associated with upper limb and trunk pain. It is also known as cumulative trauma disorder with the causal or aggravating factor being repetitive activity1.

However, the Neural System can also cause pain related to chronic RSIs.

The role of Neural Tissue in movement and sensation

We all know that our joints move and our muscles contract and stretch. But did you know that your nerve tissue also needs to move freely and unimpeded2?

Unlike muscles nerves do not have an inherent ability to contract and so the movement of nerves is entirely passive, that is, they are pulled by the movement of the limbs which are themselves moved by the contracting muscles.

The overall control of our movement is initiated by neural cells in the Motor Cortex of the brain. 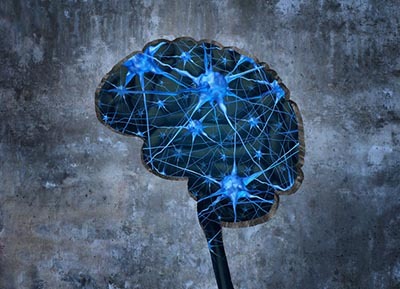 The nerves in the body are not only responsible for the control of movement but for sensation as well and so each nerve has a motor control as well as a sensory function.

The nerves are broadly made up of two fibres:

Sensors within the skin, muscles, tendons, joints, ligaments for example initiate electrical impulses which pass upward and towards the Sensory Cortex in the brain

The nerves, therefore, provide the pathway for efferent and afferent electrical impulses to pass to-and-fro along their course.

The structure of these pathways is somewhat analogous to underground telephone cables running in tubes or conduits.

Unlike the underground telephone cables that only move along their conduits during construction or replacement the nerves lying in their conduits within the human body must be able to constantly slide and move.

Another analogy is the concept of a brake cable1 which is placed within a surrounding protective and flexible outer tube. The brake cable is the neural tissue with the surrounding tube being the conduit or neural sheath.

This sliding movement of the nerves takes place, for example, during a movement such as picking up a telephone and moving it to your ear. The nerves involved in the movement must function just as well when the arm is straight, when picking up the phone, as when the arm is bent at the elbow when the telephone is held to the ear.

During the movement the nerves slide and can be seen under ultrasound scans to be drawn downwards in their conduits as the arm bends, moving back to their original positions as the arm is straightened. This sliding of nerves in their individual conduits occurs all over the body as we move around.

Causes of the symptoms of RSI – Adverse Neural Tension

In the example of picking up a telephone to remain healthy and symptom free your nerves should be able to freely travel along their conduits between your spine and your fingers.

If a nerve movement is impeded at any point in the conduits between your spine and your fingers, then the nerve will be stretched beyond its natural elastic limit causing adverse neural tension.

To help understand the phenomenon of adverse neural tension it is important to understand how the neural system is structured and moves.

The neural system is in fact a continuous structure that incorporates the brain, the spinal cord and the spinal nerves.

The spinal nerves exit from each level of the spinal cord to pass to the head, neck upper limb, trunk and lower limb respectively.

As we move our bodies the whole of the neural system moves such that if we flex or round our spines, for example, all the spinal nerves are drawn upwards and become tighter within their respective conduits causing an overall increase in tension within the neural tissues.

A bulging disc in the neck, for example, pre tensions a nerve as it exits from the spine with the effect that there is no longer any slack, so to speak, to take up within the nerve with  the effect that when we then flex or round our spines such as when sitting in a poor “slumped”  posture the nerve is then further stretched and adverse neural tension results.

Healthy nerves have a supply of fluid called axoplasmic fluid, which provides the nerve with nutrients2. Normally, a pressure of about 70 mmHg propels this fluid slowly along the length of the nerve in its conduit. However, if the nerve is slightly squashed (e.g. by a bulging neck disc) then the flow of this fluid is interrupted, and the nerve starts to degenerate. 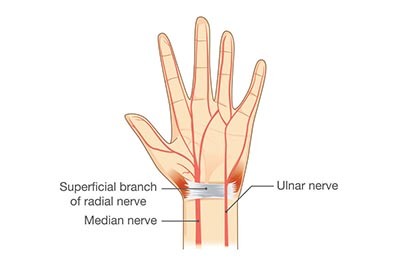 There are three main nerves that exit form the spine in our necks and pass down the arm towards our fingers. The radial nerve, the ulnar nerve and the median nerve

Any of these nerves can be placed under further increased tension if their movements are impeded at any other point in the limb.

For example, if the median nerve is impeded at the elbow as is passes under a muscle then the nerve will not be able to slide at two points in its path between the elbow and the bulging disc in the neck. Furthermore, repetitive movement in the limb will aggravate the median nerve still further by repeated stretching causing a neuropathy and further nerve damage.

The pathological changes that occur as a result of adverse neural tension can cause chronic symptoms.

Numbness and or partial numbness are an immediate indication of neural damage and these symptoms can occur without pain. Weakness can occur and along with numbness other symptoms such as a sense of swelling can occur and various descriptions of the perceptions of pain including, “vague”, “deep”, “burning” “heaviness”, “searing” and many other terms. The symptoms can be worse at night and at the end of the day1.

The nerve signals caused by the adverse neural tension damage pass to the spinal cord where the signals sensitise adjacent nerves potentially resulting in muscle spasms in the regional area or joint.

These pain signals can also be sent to the opposite side of the body, resulting in the development of a bilateral pain complaint, or they can spread proximally and distally from the original site of injury.

The pain signals are then transmitted from the spinal cord to a part of the brain that is associated with feelings and emotions. This type of pain is commonly associated with fatigue, anxiety, despair, depression, and fear.

The type of pain develops over a period after injury, fluctuates in intensity, and is often difficult to localise. This nerve irritation can also cause distal neural elements and tissues to become increasingly sensitive including joints, muscles, and skin which can be equally impacted since they share a common nerve supply.

With an appreciation of the neural system being a continuum and the mechanics of nerves regarding how they slide and have an inherent elasticity the way some postures can place the neural system under tension can be understood.

Within this context there are two aspects to consider:

Examples of everyday static postures that place the neural system under tension include but are not limited to:

A combination of repetitive movements and static posture is probably the worst combination in terms of the health of neural tissue and a cause of symptoms. 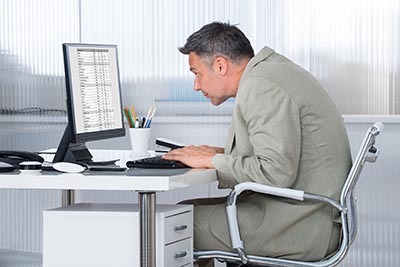 An example of repetitive movements and static posture is the office worker who operates their keyboard and mouse with a posture of the spine in some degree of flexion or “slumped” with a poking out chin. This posture places neural tissue such as the sympathetic trunk on tension. Adverse tension on the sympathetic trunk can cause the blood supply to nerves to be inhibited thus at least contributing and at worse causing the symptoms described above.

The symptoms described above can manifest themselves as part of the most commonly described neuropathy, carpal tunnel syndrome (CTS) which involves the median nerve.

The median nerve when pretensioned say by a bulging cervical disc and or entrapment under a muscle at the elbow may be predisposed to the development of the syndrome.

In order to prevent the symptoms that are caused by adverse neural tension, the best strategy is to avoid static postures that place the neural system on tension and adopt a neutral posture instead. It is important to regularly move between neutral postures.

For example, from one neutral posture, say in sitting, to another neutral posture in standing with occasional exercises between these two postures. These exercises can be thought of as taking the neural system through a range of movement and not just exercise for the muscles, joints and the heart and lungs.